Ok, so you decided to take the plunge and build your own custom car. Before you go searching the countryside for that barn find or Craigslist for that basket case, here are my best tips to help ensure a successful outcome and help keep you within a budget.

There’s a million different reasons to pick this brand or that model car as a build project. For a low budget custom car with the easiest build possible and fewest restrictions, these are 10 vehicle selection criteria I recommend using:

If body style options are open, then it comes down to your personal tastes. Resale value is not my primary concern when I am building but I still do not completely ignore potential resale value when it comes to a project car.

These 10 criteria do not apply to a parts car. 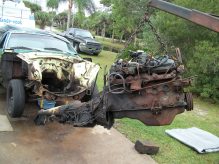 A parts car is a vehicle purchased solely for the purpose of removing valuable pieces and parts from it for your project car and then selling or scrapping the carcass like I did with this 75 Maverick.

Parts cars can often be found for less than $500 , which can be cheaper than a single major project component like a motor or transmission. A parts car should be the same model as your project car if suspension, body panels, trim, and interior parts are needed, or it may be completely different car with a list of usable parts like motor, transmission, rear end, etc. Sometimes it only needs to be a similar sized car if you are looking for seats, spoilers, rear ends, wheels, etc.

Following these 10 tips can help keep build costs down and put your completed project on the road sooner. Good luck with your build!

Opel GT picture from craigslist posting and  F250 picture from Google images, both  photographers unknown. All other photos by:David Wilhite