Seen from the road in March:

I saw this nose sticking out from the hedges 2 blocks down a side street. 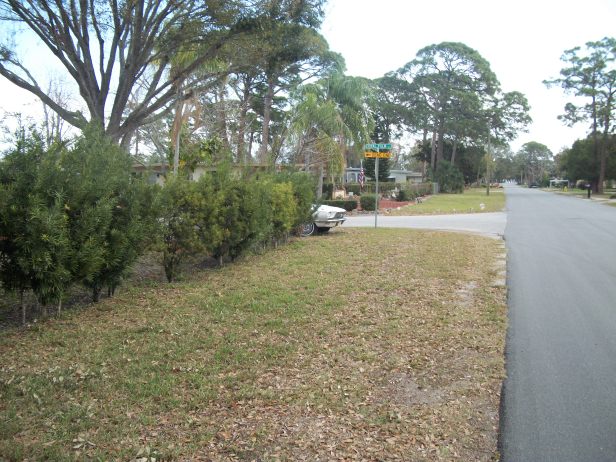 The straight front bumper identifies this one as a 1966. The 64 and 65 models had front bumpers that swept up to meet the downward sloping hood. 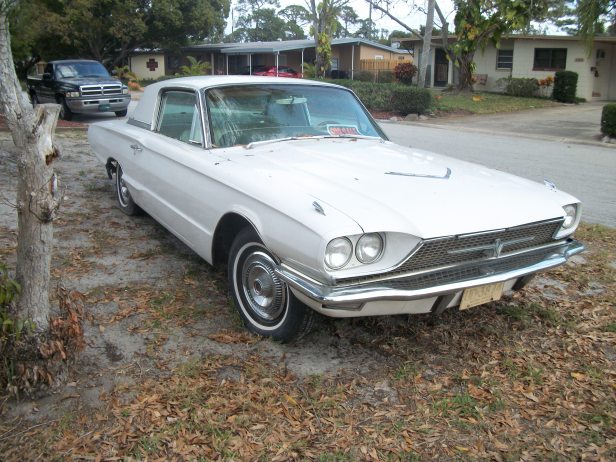 Its hard to call any Thunderbird a base model, but this hard top coupe was the base model.This one was in really good condition. The Thunderbird Town Landau option package was distinct from the hard top with a full vinyl covered roof and the Landau bars on the b-pillars.

This body style Thunderbird only came with the best of Ford’s FE series of big block V8’s, either the 390 or the 428. The 428 was more common in the higher priced Town Landau option package cars. The bigger “Q-code” 428 motor was a rare option in the hard tops. 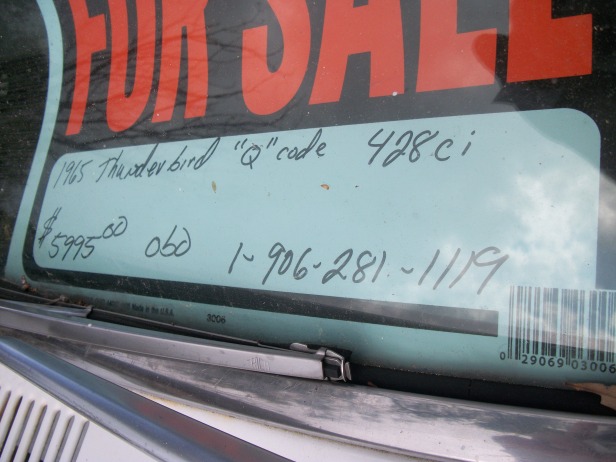 Even though they weighed almost 2 and a half tons, if the tires would stick, Thunderbirds launched like rockets and this is the last view most stoplight dragsters had of Thunderbirds.

Ford stuck to the “Personal Luxury Car” niche they created with the Thunderbird and kept the standard equipment list long, including power steering, power disc brakes, power locks and driver seat, and ultra plush interiors. This one even had the optional power passenger seat. 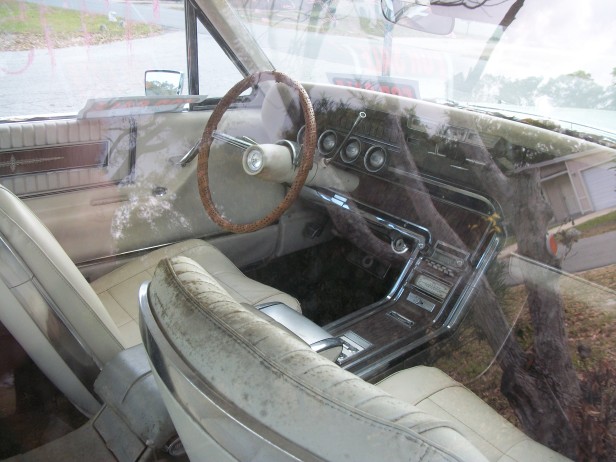 I called the number on the for sale sign and talked to the guy that had it up for sale. He said he owned a metal recycling yard in the Upper Peninsula of Michigan and someone brought it in for scrap. It had belonged to a relative that passed away and had been in a barn for many years and they were liquidating the estate. He bought it from them with a clear title for cheap. He cleaned up the motor and interior and had it painted white from its original blue.

The interior is in much better condition than we normally see here in the sunshine state. I think a little cleaning would take those mildew spots right off.

These are the biggest flaws I could find in the body: 2 pea sized rust blisters in the lower rear quarter panel on one side.

An amazing discovery for a bargain price…

Listed specifications are according to Automobile Catalog: http://www.automobile-catalog.com/list-ford_usa.html